Capilaism is at an end!!

I am sure most of you have heard the glorious news comrades! For those of you who have missed the boat or have just gotten out of the Gulag, our glorious 'Bailout Bill' has passed!! I still chuckle every time I hear it called that for as we all know it has absolutely nothing to do with bailouts. Ha!
We now control private property....huh? What do you mean 'How do we control private property?' Moron. Sit down and take notes, polish your shovel while I am explaining this again.

When you have a mortgage on your house, do you own the house? Or does the entity that holds that mortgage own your house until you pay it off? So the bank held the deed to your house until you paid them back their money. Well now the bank doesn't hold that mortgage, the government does. So now the government owns your house until you pay off the mortgage. Through this method of control we can force all our 'green' crap down people's throats, force them to buy the heaters and air conditioners and water heaters that we want. And we can even dictate to people where we want them to live!!
"No no. We're not giving you a mortgage for a 5000 square foot house for just you and your wife, thats too big. Individuals are only required to have 300 square feet allocated to them. We will however give you the mortgage for that house if you are willing to take in 17 low income and indigent individuals."
Don't you see? This is the perfect method for control! This is the great leap forward The Party has been waiting for!!! Our biggest hurdle has been private property. Now that we have wrested that away from the masses the rest will be cake.
Sing the praises of the Soviet Union comrades! For we are victorious!!

Of course it could all fall apart if the sheeple wake up and badger their representatives into submission and the bill doesn't pass. That would be a dark day indeed. But let us not dwell on the negatives comrades! We need to focus on the positives and our accomplishments and look to the glorious future of peace! A world at peace beaten into submission and united under the banner of communism!
Posted by O'Brien at 5:51 PM 2 comments: 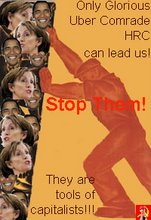 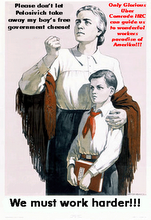